How We Got Started

How We Got Started

Janzen Morgan Farm decided early on that if they focused on the versatile characteristics associated with the Brunk lines and stood well-bred black stallions, their herd would attract attention. Drawn by attractive, athletic movers with high intelligence and tractability and by Beamington’s dominance in sire ratings, Janzen Morgan Farm searched for a black son of Beamington.

With the mortgaging of the farm, they bought Whispering High Beam (Beamington x Highover Desiree by Donlyn of Wind-Crest out of a Waseeka’s Nocturne daughter) in 1982. The Janzens then started a campaign of extensive travel to acquire a large herd of breeding stock with a wide range of promoted bloodlines. In 1983, a second black son of Beamington, Windhover Regency (out of a Flyhawh daughter) was purchased to use and cross with the expected High Beam daughters to intensify the traits of Beamington, Flyhawk and Senator Graham.

These matings tended to produce showable offspring with dispositions and athleticism suitable for family and working horses.

So it was Whispering High Beam, with over one hundred fifty foals, that put Janzen Morgan Farm on the Morgan map and it was Windhover Regency, with his over two hundred sixty foals and his overwhelming appeal, that came to be the farm’s image. Irish Entertainment, two time Reserve World Champion Stallion, out of a WC Beamington daughter, Justa Joy, intensified the Beamington bloodlines further. 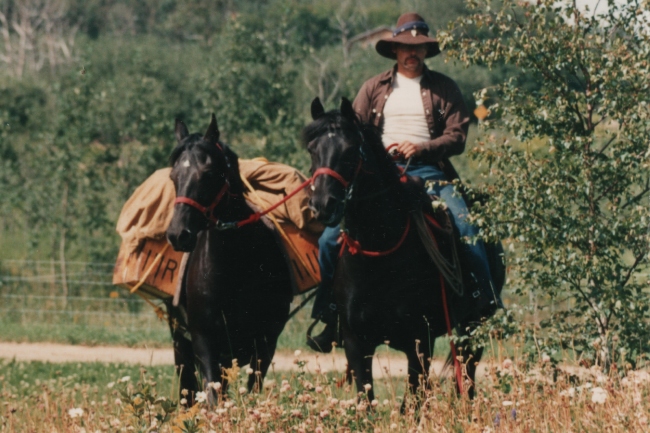 You are invited to view these truly versatile stallions, the remaining broodmare band and their proud offspring. Known for producing Morgans that are usually personally trained, used and shown by their new owners, Janzen Morgan Farm also offers continued service to their customers, many of who become repeat customers and often friends. The Janzens look forward to the future of making more Morgans …… and many more friends.

Written by Will, Dorothy & Bruce Janzen